The clock tower was built in the memory of Francis George Atkinson, Jesselton's first district officer who died of Malaria or ‘Borneo Fever’ at the age of 28 in December 1902. His mother Mrs Mary Edith Atkinson presented a two-faced clock to Jesselton town as a tribute to the memory of her son and it was decided later that a clock tower would be built in his honour. The structure was commissioned on 20 April 1905. A road was also named after him – Atkinson Drive, now renamed as Jalan Istana that links Tuaran Road over the ridge and downtown Kota Kinabalu.

The clock tower was originally built using Mirabau wood. Its construction was financed by Atkinson's friends and most probably built with additional funds channelled from shipwright of visiting naval vessels (the internal carpentry of the clock tower has all the hallmarks of a ship's carpenter). While still under construction the clock started working on 19 April 1905 and its chimes could be heard all over the town. The structure was finally completed in 1905. The clock was made by William Potts and Sons in Leeds, England. The company was established in 1883 and became the part of Smith of Derby Group in 1933. The UK office is now at 112 Alfreton Road, Derby.

Measuring 50 feet (15.24 metres) high x 6’3” x 6’3” at its base the clock tower stood from its lookout point on the hill facing towards the township of Jesselton. A weather vane with initials of the wind direction added a few more inches to the height of this elegant monument. Ships calling port at the wharf used the Atkinson Clock Tower as their navigation landmark, as it could be seen from the sea. The clock tower was illuminated at night and was used as a shipping landmark right up to the 1950s. 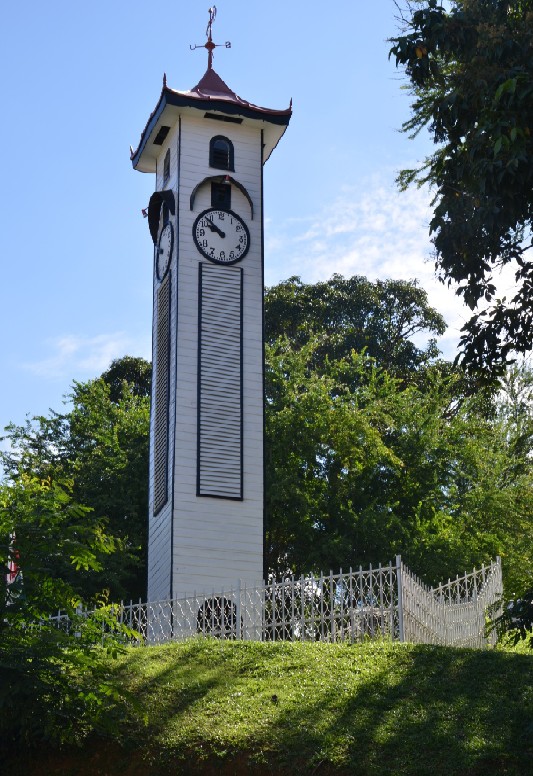